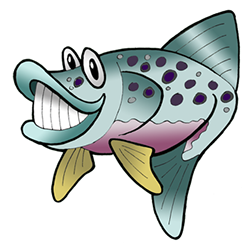 The brook trout was designated as the official State Fish in 1973 by the West Virginia Legislature in a resolution that included the black bear as the official State Animal. The brook trout is the only trout species native to West Virginia streams. Native brook trout live and reproduce in only the coldest and purest of our mountain streams. These streams are generally less than 15 feet wide, well shaded, and have numerous pools. Although these streams often support large numbers of brook trout, the trout tend to be small fish that average five to six inches in length and seldom exceed 10 inches.(WVDNR)