Discovery Room 19: The Mine Wars 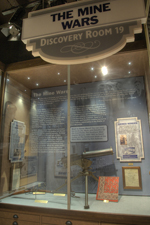 The days of the Mine Wars in West Virginia were as dark as the coal over which men struggled. Violence raged at the mines, and in the towns, as labor unrest brought a focus on troubling working conditions, poor living conditions, and the need for better communication. You’ll learn more about some of the people involved in the conflict in this Discovery Room. You’ll also see an early West Virginia State Policeman’s uniform. This law enforcement agency was formed during this time.

Get a glimpse of the issues by watching early newsreels in the 1920’s style theater that’s beside the Discovery Room. The theater is designed like the lavish theaters at the time, when Vaudeville shows and moving pictures were popular entertainment choices.

Continue to Explore, or return to the preview homepage: